Hedgehogs, moonrats, shrews, moles, etc used to be grouped under Order Insectivora, which has now been renamed as Eulipotyphla. Some go further to split the hedgehogs and moonrats out into a separate order.

There are 2 shrew species in Singapore - the House Shrew (Suncus murinus) and the Southeast Asian White-toothed Shrew (Crocidura fuliginosa).

The House Shrew (Suncus murinus), or Asian House Shrew, is a common urban mammal, but is rarely seen due to their nocturnal behaviour. Sometimes their dead bodies can be found lying around, probably having been killed by feral cats. 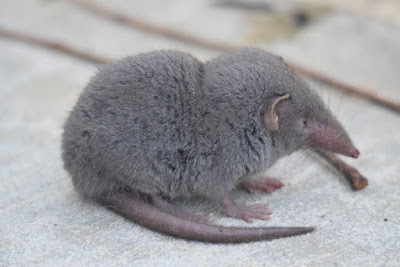